END_OF_DOCUMENT_TOKEN_TO_BE_REPLACED

Though it’s over 75 years old, the Moscow mule is one of the nation’s most popular cocktails. In 2017, it was the most Googled drink in the United States, surpassing even the beloved margarita.

A great Moscow mule combines smooth vodka with ice-cold, spicy ginger beer and lime – in a signature copper mug. Ginger beer doesn’t taste the same without the copper mug, which highlights the sweet-and-spicy taste of the beverage. Learn more about your favorite drink with some of the most interesting tidbits about its past and present.

The power of threes

Back in the 1940s, when the cocktail was invented, bars were trying like crazy to get Americans to drink vodka. (Hint: they didn’t like it much!) No one more than John G. Martin, the owner of Smirnoff.

Martin teamed up with Jack Morgan, the owner of a Los Angeles British pub called Cock n’ Bull. Morgan had too much ginger beer he couldn’t sell.

Sophie Berezinski came to California with 2,000 copper mugs she’d designed in her father’s Soviet Union copper shop. She couldn’t find anyone interested in purchasing her wares – until she came upon a vodka magnate and a British pub owner trying to make their new drink more recognizable.

The trio paired their three unwanted items into something everybody couldn't get enough of: the iconic Moscow mule.

Why the copper mug? 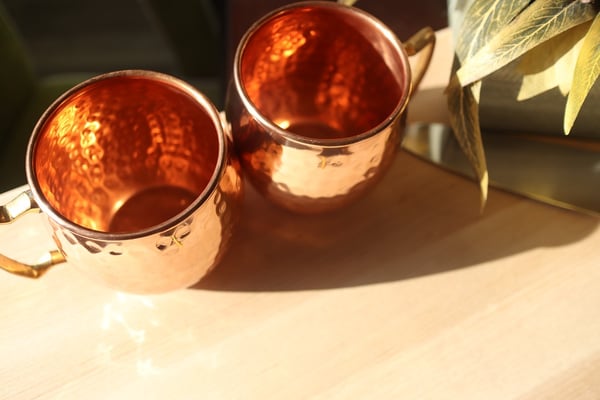 Now Moscow mules, and particularly the iconic copper mugs they’re served in, are anything but unwanted. Not only are drinkers expecting the smooth taste of ginger beer, they’re also expecting to receive their drinks in copper mugs.Mugs come in glossy or brushed finishes, and they can be embossed or engraved. Many bars sell branded copper mugs to guests who can’t get enough of this well-loved drink.

While copper mugs do make mule drinkers look cool, they also serve a purpose. Copper interacts with ginger beer to create more bubbles. That's the reason the drink tastes different in a copper mug versus a glass or plastic one. Copper also keeps the drink cool.

While the classic Moscow mule gets its name from its Russian vodka, you can make a mule with different spirits for a fun twist. Here are a few of our favorites:

1. Swap vodka for Irish whiskey and you'll have yourself an Irish mule
2. Instead of vodka, use bourbon and garnish with mint for a Kentucky mule
3. Add jalapeño pepper slices and replace the vodka with tequila for a spicy Mexican mule

Now, raise a proper copper mug and drink up!

SPIRITS GLASSES We believe high-end spirits taste better with the right glass. There are many different g...
Boelter Beverage June 22, 2022